The New World Brute, a 6 x 66 gran gordo, is the latest vitola in the line, an exclusive for Serious Cigar.

“A.J. Fernandez’s New World is a special cigar, and we love to offer our customers unique products,” said Ron Lesseraux, owner of Serious Cigar. “It only made sense to create a special edition New World, for Serious Cigar customers. It is true that everything is bigger in Texas, so we decided along with A.J. to push the limits, and create the New World Brute.” 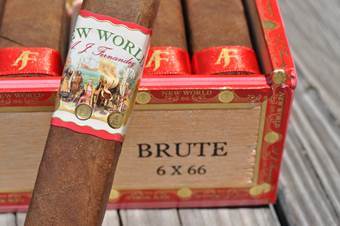 New World is a Nicaraguan puro that uses a binder from Jalapa along with fillers from Condega, Estelí and Ometepe. The cigar was introduced at last year’s IPCPR Convention & Trade Show.

In addition, to the New World Brute, the Texas Cigar Festival will also be one of two releases of RoMa Craft Tobac’s El Catador de Los Gran Robusto and the Viaje Zombie.

The Texas Cigar Festival takes place on April 25. Tickets for the event sold out months ago.