As you might have guessed, that is exactly what happened. The cigar in question is the 601 White Robusto, another entry into the ever-growing list of what’s old is new again. Unlike many of those entries, this cigar isn’t identical to the original. In fact, much has changed. The name has gone from 601 Black to 601 White, the factory has changed and it’s now an exclusive for one retailer.

Here’s what I had to say when I reviewed the cigar in October 2016:

Connecticut wrappers are not what I gravitate to, and yet, this sub-$5 Thompson exclusive is one of the better cigars I’ve smoked in the last couple months. Reinventing Connecticut or not, this is a very good cigar at an even better price. It’s an extremely methodical flavor profile that doesn’t have the most predictable of progressions, but in the end, I really enjoyed it start to finish. As for the inevitable question of whether this is better than the 601 Black? It certainly is for me. Given the colder weather I was looking for something that would be a bit shorter to smoke and the opened box of 601 White Label seemed liked a worthy candidate. The wrapper is super soft to the touch and relatively free of veins, though the wrapper shows some small bumps up and down the cigar. Aroma off the wrapper is a typical Ecuadorian Connecticut: roasted nuts and some Spanish cedar; medium-full in intensity. The foot is similar with much more cocoa, oranges and a bit of cedar. There’s pizza crust, orange peels and white pepper on the tongue and a tingling on the lips. It’s pretty full, but also not terribly pleasant.

The 601 White begins first with some red grapes before toastiness, cedar, a bit of black pepper and a flavor that almost seems like canned tomatoes. In all honesty, while there are developed flavors, it’s kind of a mess as far as trying to be harmonious. Fortunately, things get better as creaminess takes over with some earthiness and cedar behind it. Through the nose, there are oranges, nuttiness, Worcestershire sauce and a bit more creaminess. The finish has black pepper and nuttiness—and a bit more creaminess. There are two truths that must be repeated as the second third is in full swing: a. it’s quite creamy, b. the retrohale is where most of the flavor is. That being said, there’s added fruitiness thanks to some lemon and a sweet ketchup. Acidity comes and goes, interestingly, somewhat unrelated to the lemon flavor. While there are some classic Connecticut wrapper flavors, at no point in the first two thirds did it seem like this is a typical Connecticut cigar. That changes in the final third, it’s extremely creamy and sweeter. The acidity is still there, particularly on the finish, though it’s overshadowed by a crisp apple skin and some orange peel. 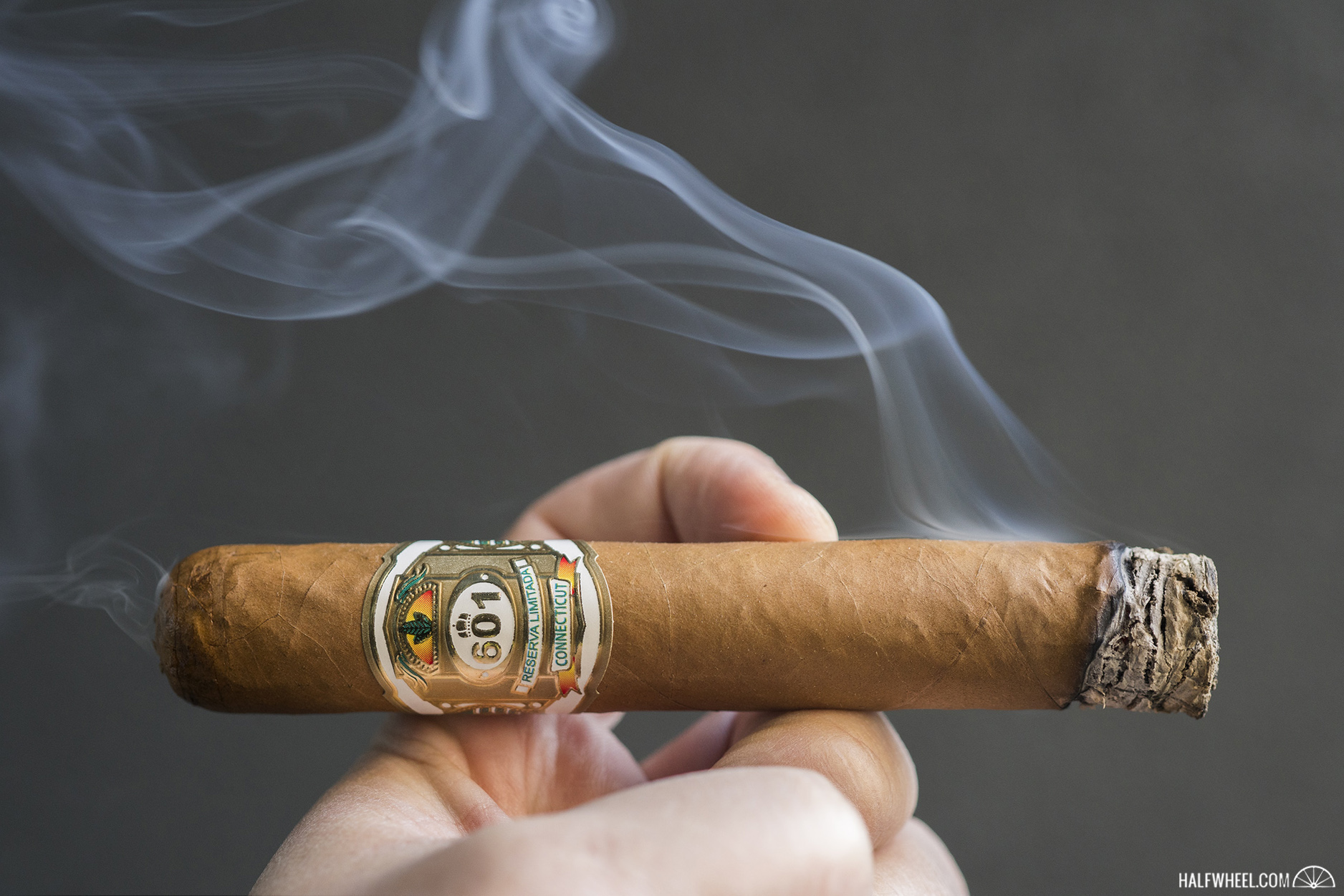 Construction-wise, there’s not much to talk about in the first third. The cigar seems to want to burn very slow, but the ash is even, the draw is fine and smoke production is high. The 601 White has some burn issues in the second third, requiring a touch-up. More concerningly, the draw is a bit tighter than it should be, particularly in the second third.

Looking back at my original review of the 601 White shows a review of a cigar that has changed quite a bit. Given the lack of time travel, I wasn’t able to smoke this side-by-side with one of the three I smoked for my initial review, but it seems quite clear the creaminess has increased quite a bit while the pepper has reduced. There are other flavors—namely the fruitiness—that remains from the original cigar, but two years has changed the 601 White. That being said the two most striking parts of the original remain the same: this isn’t a typical Connecticut and it’s still a very good cigar.