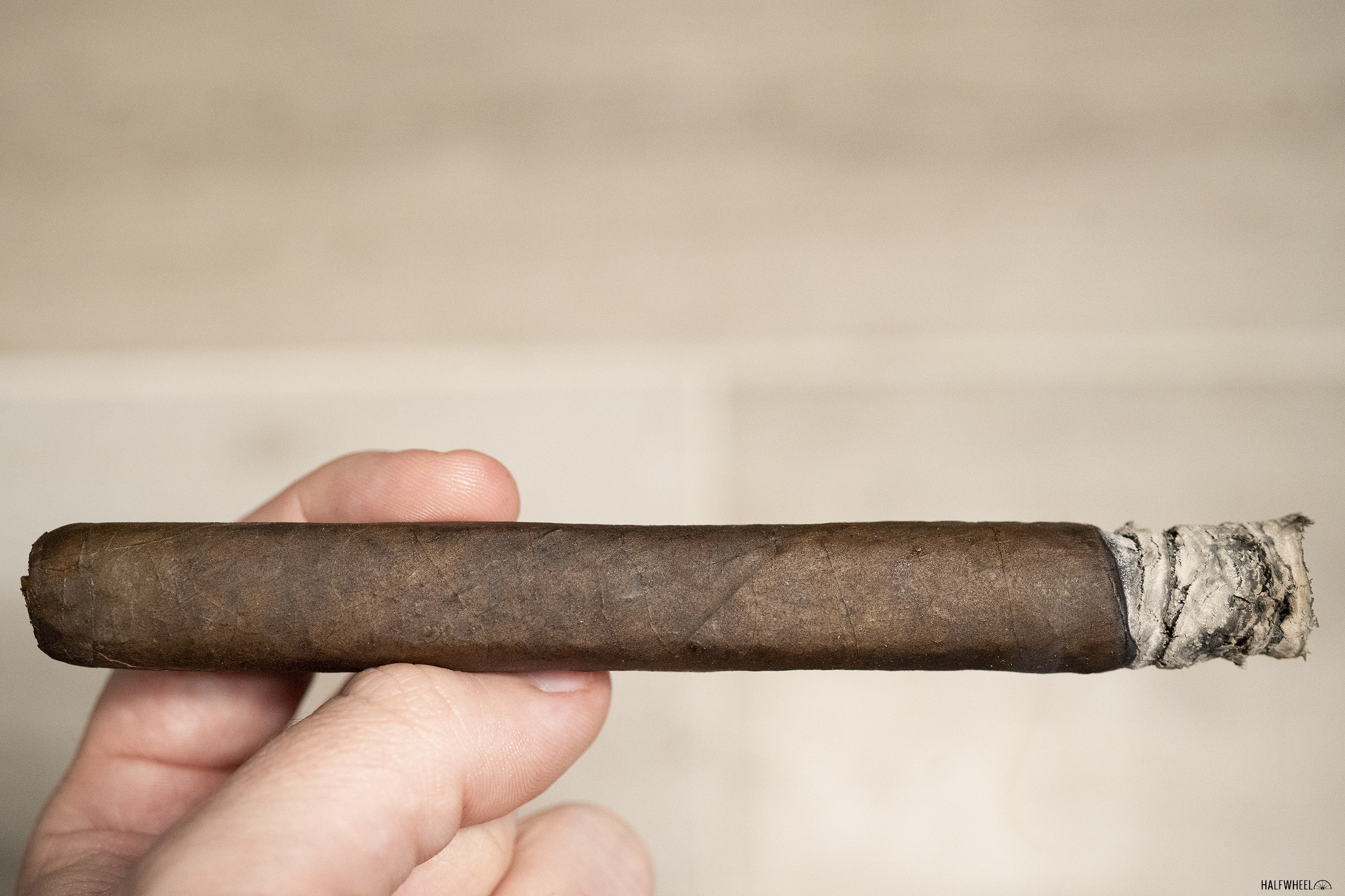 While this review will run on Halloween, the cigar has nothing to do with ghosts, ghouls, goblins, candy, costumes or any of the things typically associated with October 31.

Rather, it is the seventh installment in a series that has become a favorite among fans of Espinosa Premium Cigars, the 601 La Bomba Warhead.

The 601 La Bomba Warhead line dates back to 2013 when it was launched as a stronger version of an already strong line of cigars, the 601 La Bomba. Beyond that, it draws on World War II imagery, most notably with the band revealed to be in the shape of a bomb when removed from the cigar. That band also features nose art and aircraft graffiti of the era, in particular a shark face that is a reference to the Flying Tigers, the 1st American Volunteer Group, why painted the shark face on their aircraft.

When Espinosa Premium Cigars unveiled the line at the 2013 IPCPR Convention & Trade Show, the company brought in a decommissioned bomb and invited attendees who are active duty military and veterans to sign, with it going on to be displayed at the company’s offices in Hialeah, Fla.

While the company hasn’t released a new installment every year since then, it had done so more times than it has not:

This version is a Nicaraguan puro that uses a broadleaf wrapper and comes in a 7 x 50, box-pressed Churchill vitola. Like its predecessors, it is also a limited edition, though the specific number is still to be determined. The company is producing 2,000 boxes of 10 cigars for the initial batch but said that it would consider additional runs based on demand through the end of the year, when they will cease production of it. The cigar is produced at AJ Fernandez’s San Lotano factory in Ocotal, Nicaragua.

While initially expected to ship in August, the La Bomba Warhead VII was delayed a bit and began shipping to stores in mid-September. 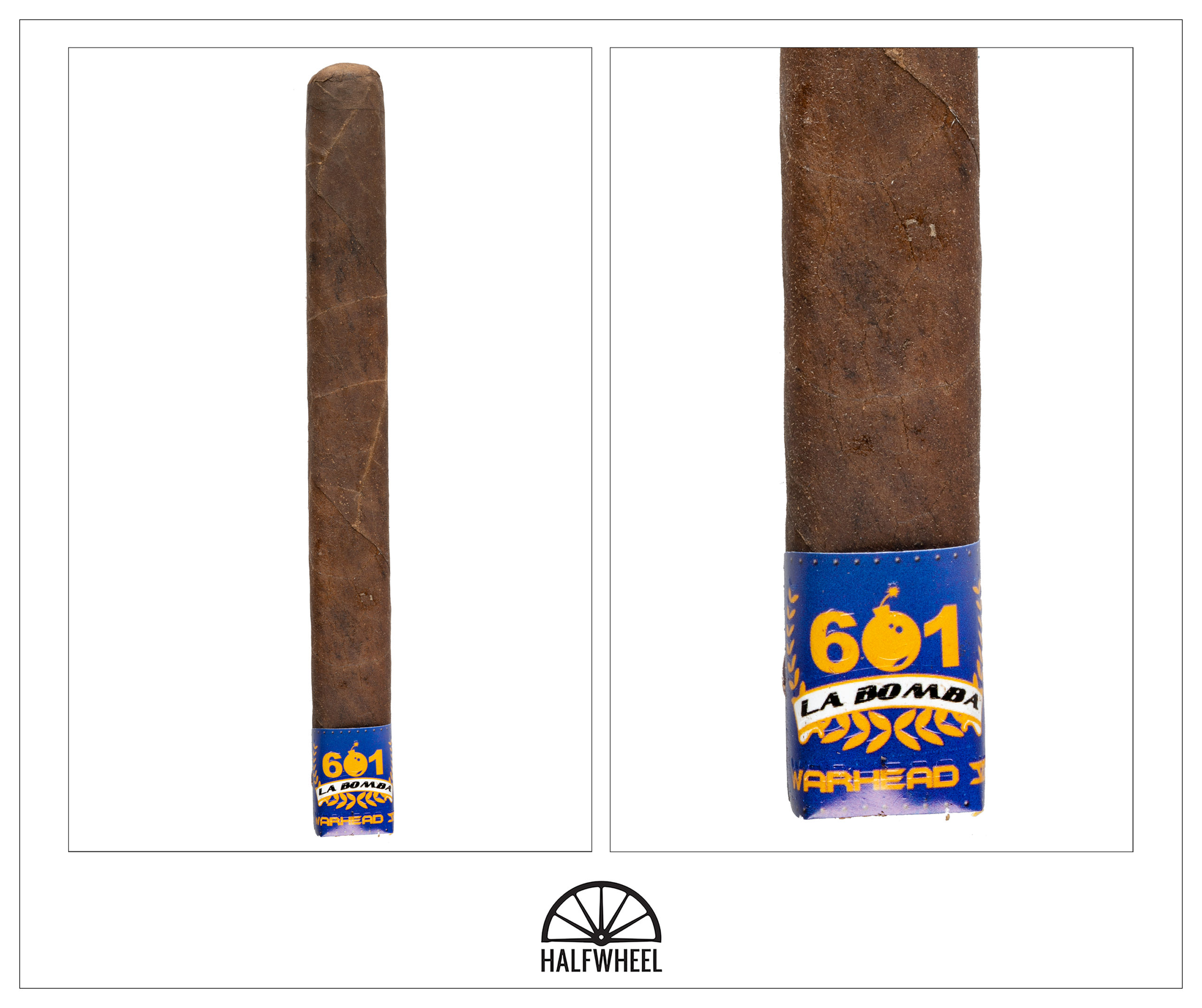 I can’t say that I see a lot of box-pressed Churchills, so it’s the vitola of the 601 La Bomba Warhead VII that first catches my eye. That’s followed closely by seeing so much of the wrapper as the band is relatively small and at the foot of the cigar, which has a visual effect of making the cigar seem even longer than it is. That wrapper leaf is a dark, earthy, almost dark chocolate shade of brown. It’s a bit rustic in some looks, a bit dry on the fingers with a velvety texture, small veins and some visual texture between them. As most box-pressed cigars do, the 601 La Bomba Warhead VII offers some give from front to back and a bit less from side to side, the overall firmness is a tick or two softer than what would be my average for the treatment. The foot of the cigar has an interesting effervescence to its aroma, and a bit of light fruit reminds me for a moment of a Lambrusco wine. Those thoughts are dashed by melted milk chocolate and a decent amount of pepper, resulting in a rather unique profile. The cold draw is smooth, maybe a tick on the open side, and offering flavors that reprise the sweetness from the aroma, though the chocolate is now like a Hershey’s bar out of the refrigerator, while dry wood takes the place of the pepper on the finish and latches onto the tip of my tongue.

I’m not surprised to find that the 601 La Bomba Warhead VII starts with a bang, though it’s a lighter flavor and body than I anticipated, driven more by the dry woodiness than it is earth or pepper. Both of those are there and contributing, just not quite in the lead role. Pepper evolves in the first inch, taking over the finish and leaving a more prominent and lasting tingle on the tongue. There’s a bit drier, somewhat dusty earth and some lingering smokiness in the mouth to further the progression. Retrohales are impressively bright and pepper-laden, energetically tingling the nostrils right from the get-go. While I find my palate embracing the flavors offered, I also find it craving the chocolate from the prelight experience; I think I find some traces of it, though I wouldn’t turn down a bit more. There’s a dry tanginess coming into the profile towards the conclusion of this segment, reminding me a bit of damp bark on some puffs, or a Worcestershire sauce on others. Flavor is medium-full, body has been a thin medium, maybe even medium-minus, while strength so far is medium. Construction is good with plenty of smoke and an even burn line, though I wouldn’t turn down the opportunity to firm up the draw just a bit.

After some puffs that dry out my mouth, a bit of creaminess enters the profile as the 601 La Bomba Warhead VII enters its second third, a change that does more for the body of the smoke than the flavor. The cigar also becomes about as easy to smoke as any I can remember, as an easy puff produces a good amount of smoke. Some of those puffs finish on a particularly dry note, one that is slightly sweet and leads me to think of raw baking ingredients. That extends to a flavor that tastes either like a fairly creamed coffee or an overly dry latte or cappuccino. There’s a touch more creaminess at the final puffs of this section, and this addition nudges the flavor as much as it does the body, so much so that I find myself noting the change and how smooth the smoke is. While this section has largely seen the creaminess of the cigar develop, there is still pepper, earth and dry woods, yet they seem to be more in the background than they were earlier. I don’t even begin to consider the profile to be the strength bomb that the name would suggest and with the development of some more supporting notes, I could see this turning into a rather complex profile.  The 601 La Bomba Warhead VII has a hearty medium-full flavor now, body is medium-plus, and strength is up to medium. Construction remains good, the draw is still a touch loose but it is very smooth, while the burn line is even and smoke production is plentiful. A retrohale at the start of the final third shows that the 601 La Bomba Warhead VII has sharpened up a bit through the nose, with the pepper still bright but much more pointed than it was earlier. The flavor still has some creaminess, though it has dialed back a bit and the consistent woodiness is now more prominent. I can’t quite pinpoint why, but the flavor profile seems to now be at its most complex, with my first attribution being the developing terroir that is much more nuanced and detailed. There is also a bit more heat from the cigar, and by that I mean true heat, not chili peppers or flavors along those lines. The heat forces me to slow my puffing rate just a bit, which mitigates a bit of the effect. The flavor still has just a touch of sharpness to it—not enough to call it a bite—but it hits the tongue with a bit more teeth. The final inches move the now lighter earth flavor into the center of the profile, surround it with pepper and occasionally flirt with a bit of cocoa powder for some sweetness but also a bit more of a mouth-drying sensation. Flavor finishes medium-full, the body of the smoke is in that medium-full range as well, while strength doesn’t seem to be much beyond medium-plus, though more on that in the final notes. Construction remains fantastic and problem-free. Even if you hadn't smoked any of the 601 La Bomba releases in the past, Warhead or otherwise, the name would seemingly be a giveaway as to what the cigar holds in store. Yet that wasn't the case with the 601 La Bomba Warhead VII. Yes, there is some strength, and a sneaky strength at that. Yes, there is earth and pepper and other hallmark flavors of strong cigars. But there also seems to be some restraint in the blend, and as noted above, an impressive introduction of creaminess in the second third, which ends up making the cigar much more approachable and palate-friendly than it might appear. What I found most interesting were the points where the cigar seemed destined to turn really complex, falling just a supporting flavor or two from doing so, and seemingly not quite making the most of what it does offer when it comes to the complexity category. But make no mistake, this is still a good cigar and one that belongs alongside the other six releases, and one I'd easily recommend trying by all but the most strength-averse of cigar smokers.