Today we will be taking a look at a new cigar from the EO Brands team Eddie Ortega and Erik Espinosa, the 601 La Bomba! Completely handmade in Estelí, Nicaragua the cigar is rumored to be a full bodied and a real powerhouse. While EO Brands is keeping the details a secret for now we will assume that the cigar was made by Jaime García at his My Father S.A. factory since the rest of their cigars are.

Recently Eddie Ortega posted on Twitter and Facebook that he would be sending out a pre release sample pack out to people who registered on the website. Of course when I heard that I obviously signed up with much anticipation because EO Brands and specifically 601 are among my favorite cigars and a full bodied cigar to boot. No brainer right? As stated before the official details of the cigar and its blend are being kept secret at this time. Dan Reeve over at Crooked Burn got in contact with Eddie Ortega and he said this on the matter.

The only thing I can tell you is that it’s very full body and has lots of flavor and that it’s made in Estelí, Nicaragua.  All else, we plan to keep under wraps

At the time of the release there is rumored to be only three sizes to start with. The La Bomba is a solid looking cigar with a fuse like pigtail, unfortunately mine fell off, with a nice medium chocolate wrapper with minimal veins and a tight seam. The cigar is packed very tight and has a hard feel to it, not much give at all. The pre-light aroma smells of fresh earthy tobacco with some cedar. The foot smells of milk chocolate and leather with a sweet fruitiness behind it all. The pre-light draw is quite mild with tobacco, earth and a touch of pepper.

Starting off in the First Third the cigar is a lot more mellow and mild out of the gate than I expected. There are flavors of sweet tobacco, earth, chocolate, coffee and a touch of pepper on the finish. There is virtually no spice whatsoever…not even a tingle of spice or heat through the nose either. The finish is short with some earth and leather. I would call it a medium body to start, the smoke is very thin and airy but it definitely has a little strength behind it. Coming into the Second Third the cigar continues on from the last third with a solid earthy, sweet tobacco profile. There are flavors of coffee bean, leather and some chocolate. There is a touch of pepper on the draw and on the finish but still no spice to speak of. The smoke is picking up in body and getting thicker and more abundant but I would still only call it medium maybe medium to full. I get a little nicotine rush towards the end of this third. 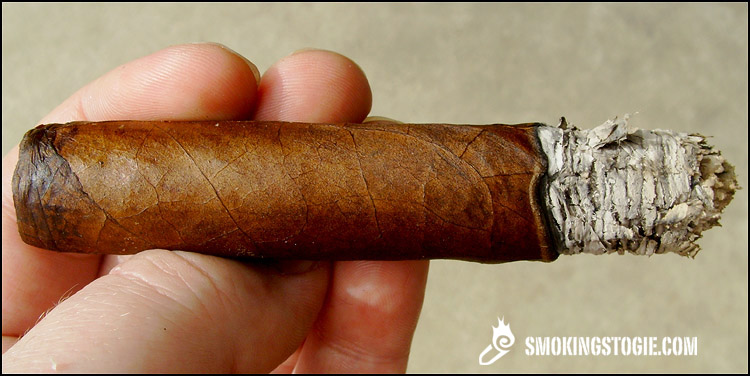 Finishing up in the Final Third the cigar shifted just a little bit, the flavors heated up and I started to get a little more pepper on the finish. There are hints of a more roasted coffee bean flavor as well as an increase in the leather, still mostly an earthy profile with sweetness here and there. The finish is still quite short but flavorful nonetheless. The Bottom Line: This was a good cigar from start to finish. Like I said it’s not that complex but regardless it provided an enjoyable smoking experience, however I didn’t find it to be as full bodied as say the Green Label Oscuro or as full flavored as the Blue Label Maduro. Nine times out of ten based on this one sample, I would grab a Blue or Green Label before this one. While it had a big nicotine kick, it didn’t have any balance of flavor or body to compare in my opinion. Add the lack of complexity and you just have an average cigar. This comes as a huge surprise to me because based on the pre release hype I had huge expectations for this cigar. In the end: it’s a good cigar, I would just rather smoke a number of other EO Brands cigars before this one.