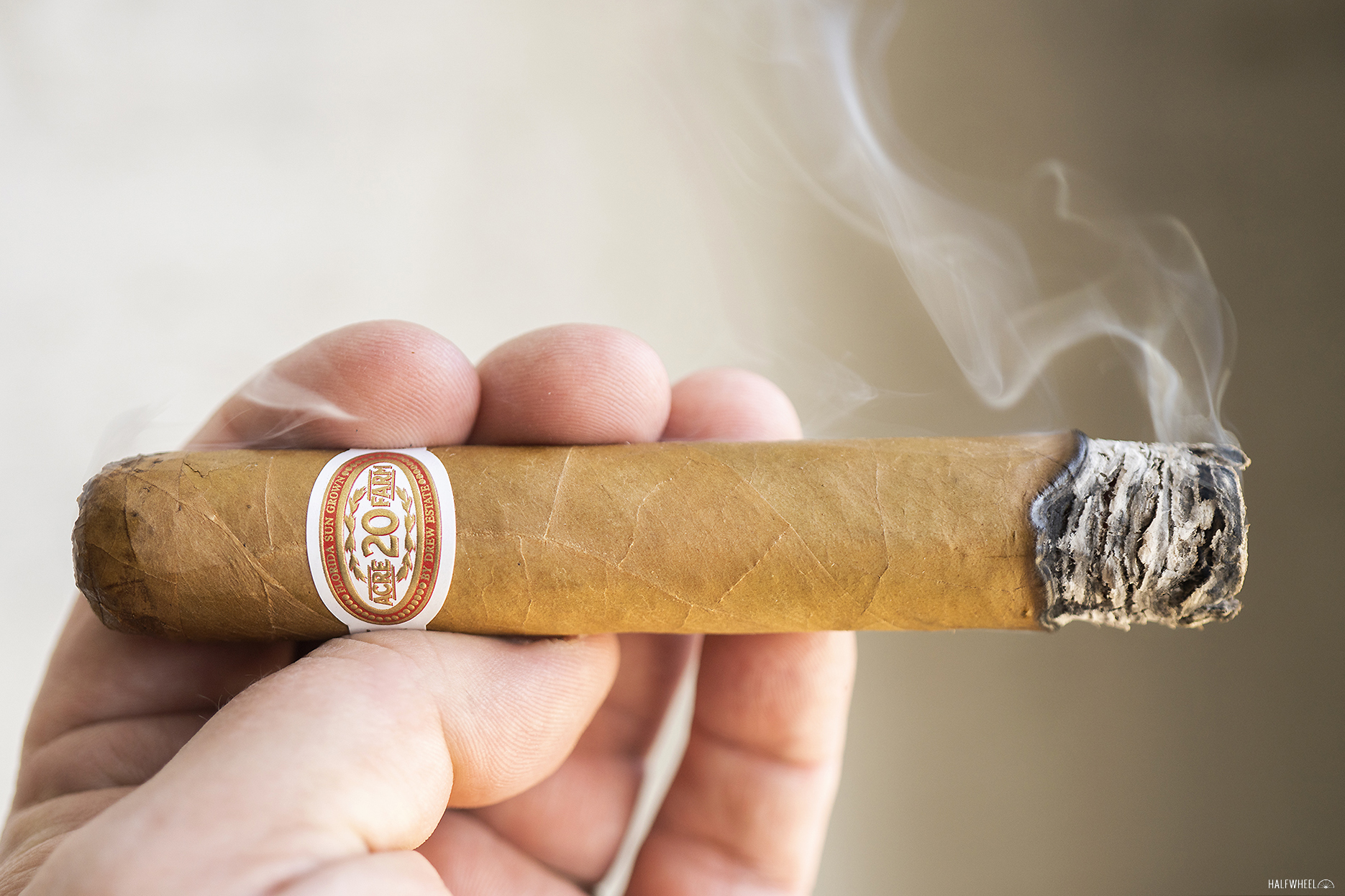 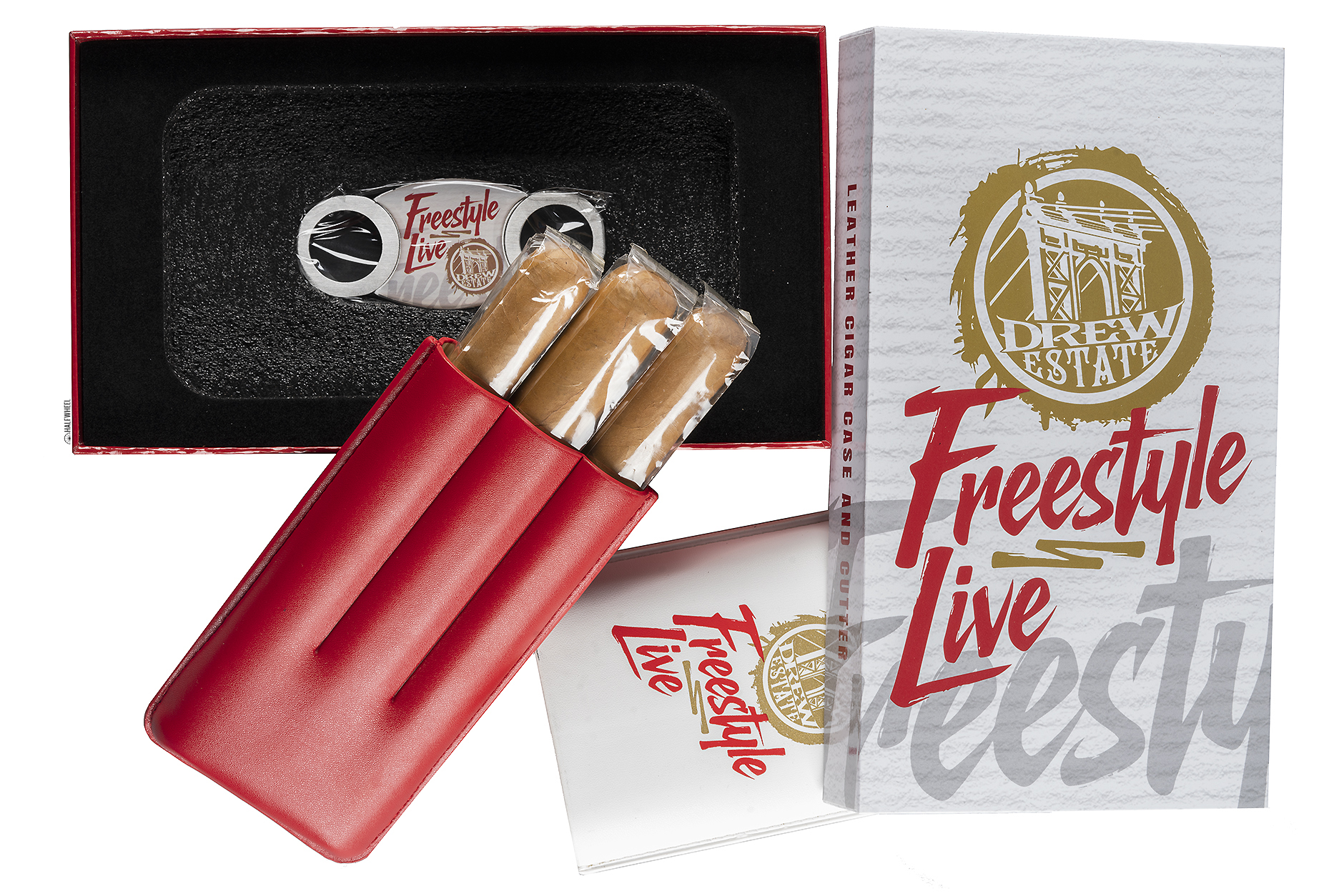 Fans who purchased the package found out what the cigars were during the company’s “Freestyle Live: Special Edition” broadcast on Nov. 11, 2021: dubbed 20 Acre Farm, the three-viola regular production release takes its name from the 20-acre farm in Florida owned by Jeff Borysiewicz of Corona Cigar Co. fame.

Blend-wise, the 20 Acre Farm incorporates an Ecuadorian shade-grown wrapper covering a Honduran habano binder along with filler tobaccos from Nicaragua’s Estelí and Jalapa growing regions. In addition, the cigar includes Florida Sun Grown tobacco, which is grown on the aforementioned 20-acre farm located in Clermont, Fla. 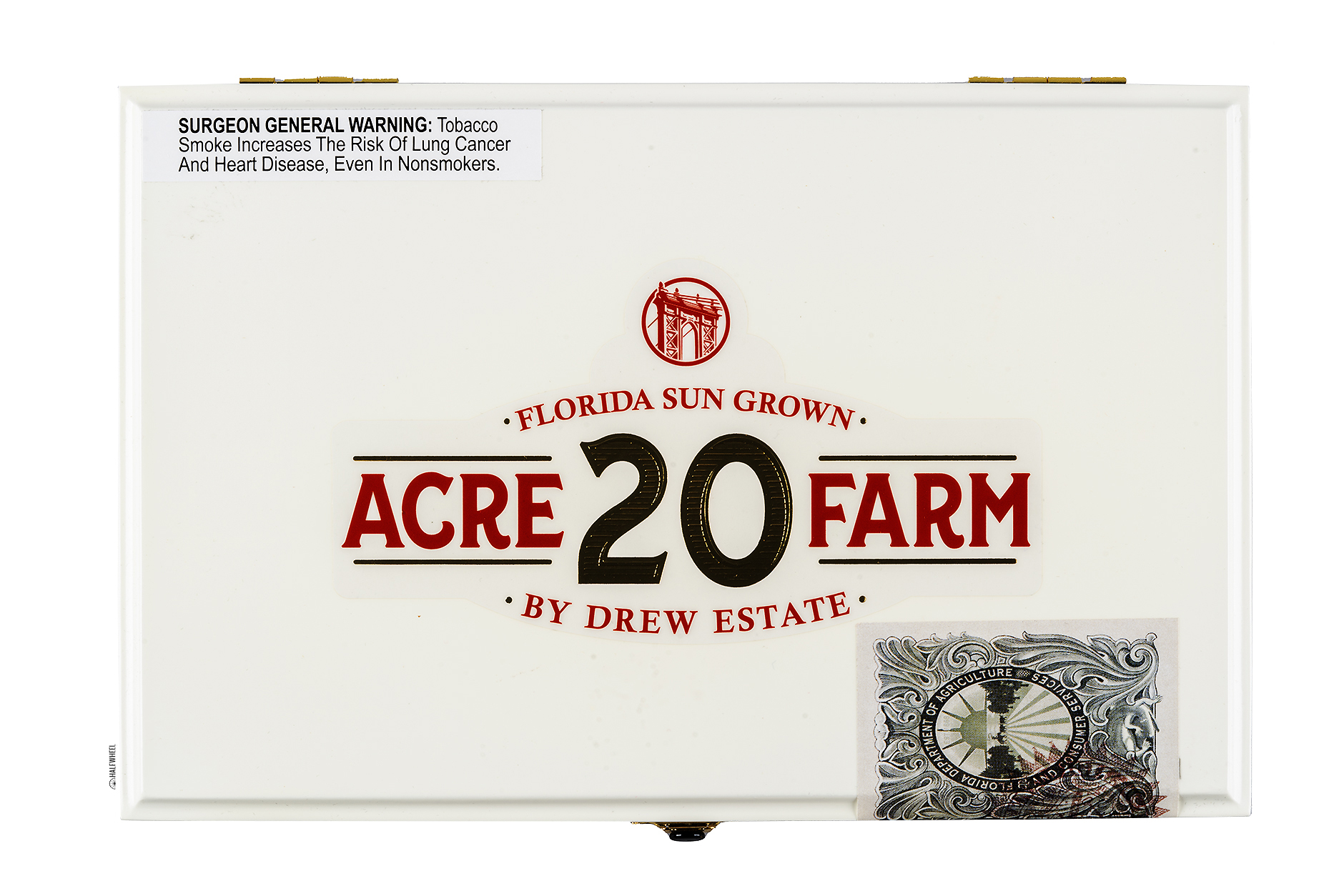 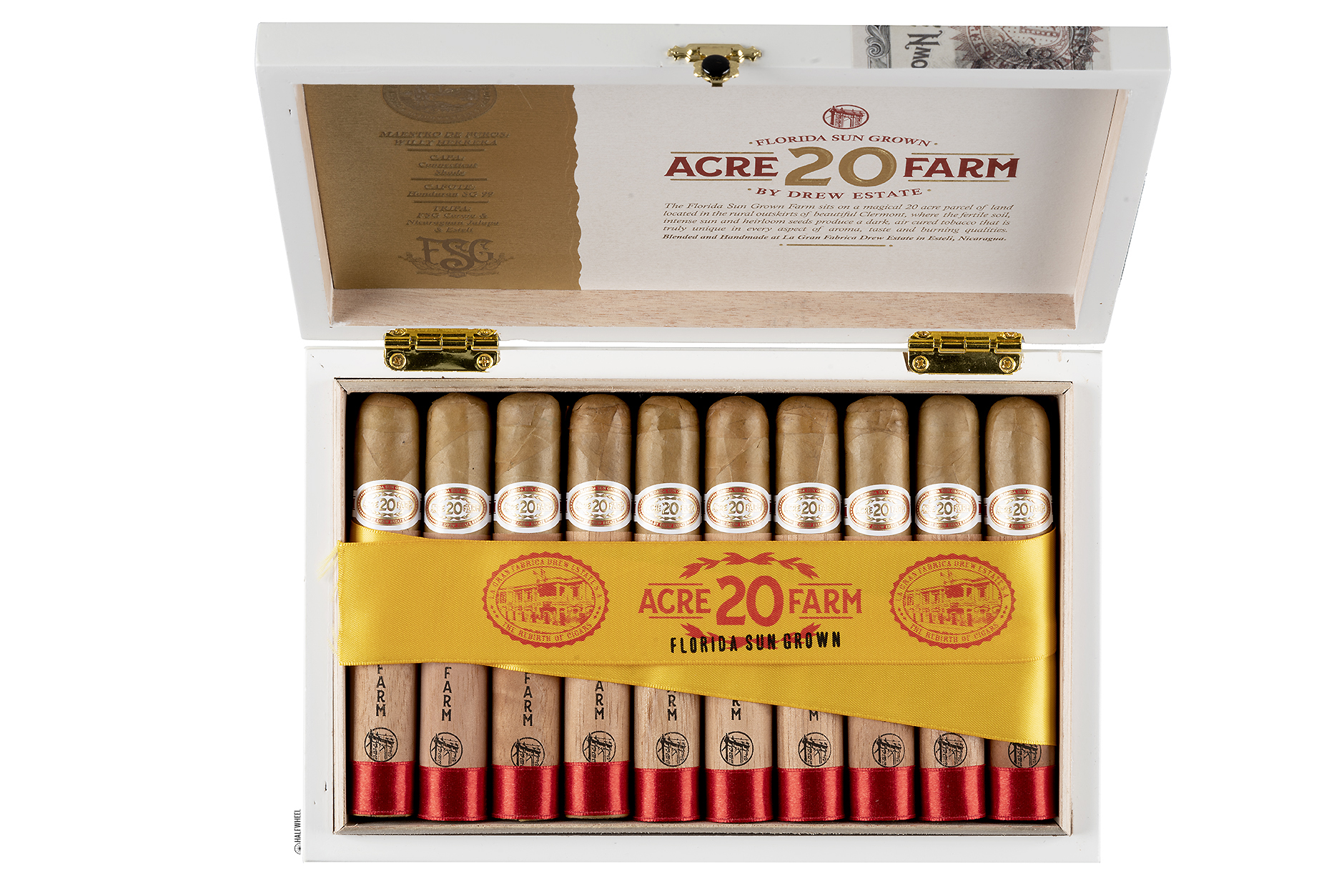 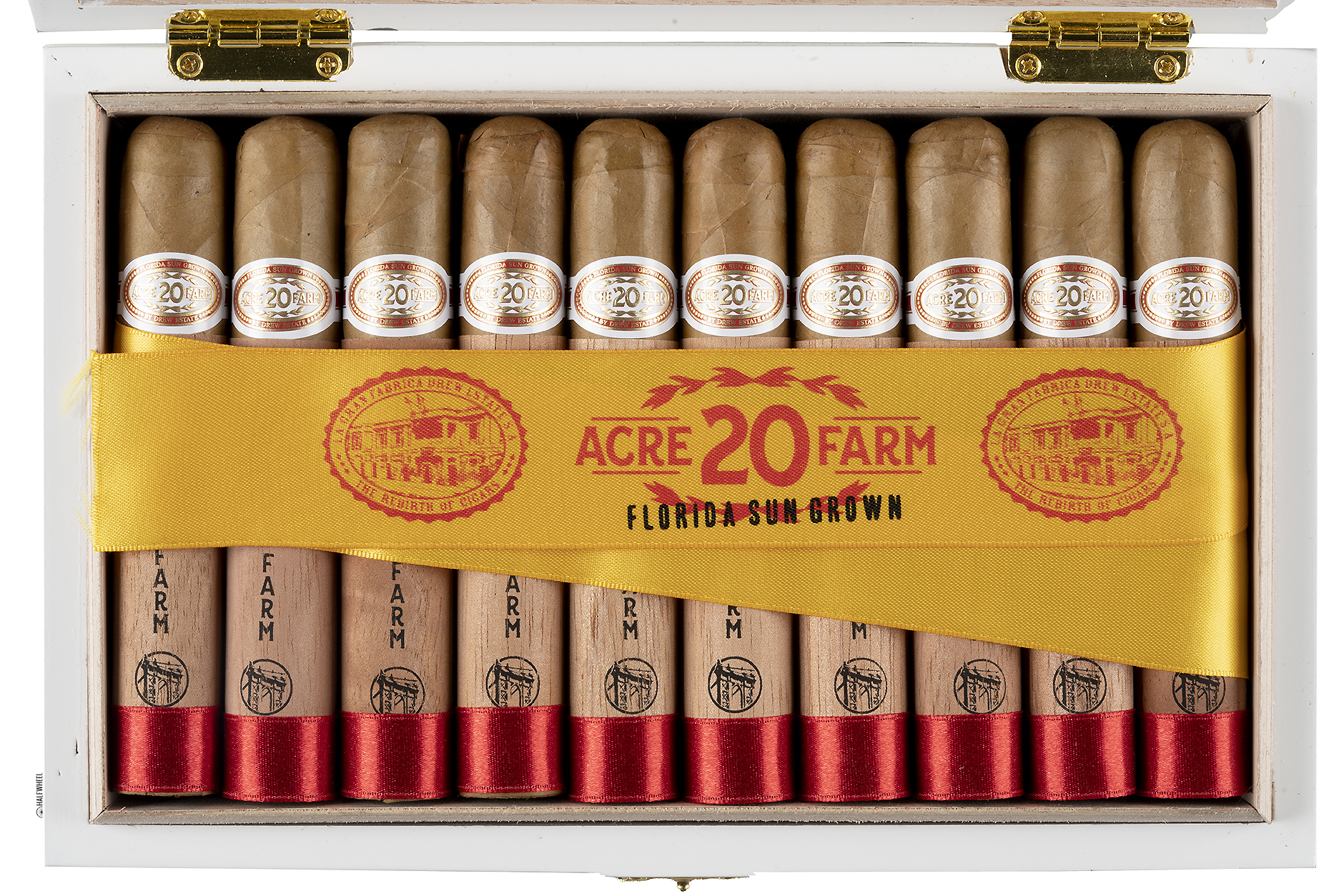 “The amount of fun I experienced unveiling 20 Acre Farm with Drew Estate during Freestyle Live Special Edition was intense and I’m extremely proud of the cigar,” said Jeff Borysiewicz—who owns the farm along with Corona Cigar Co., a Florida-based retailer—in a press release. “20 Acre Farm is a masterpiece that showcases our Florida Sun Grown tobacco while enhancing the sophisticated smoking characteristics of the other tobaccos in the blend, especially the Connecticut Shade Grown wrapper. As a premium cigar retailer for more than 20 years, I can’t wait to offer 20 Acre Farm to my customers and I’m looking forward to hearing what other premium tobacconists think of the cigar.”

There were three different vitolas in the 20 Acre Farm line when it shipped to retailers in December 2021, all packaged in boxes of 20. 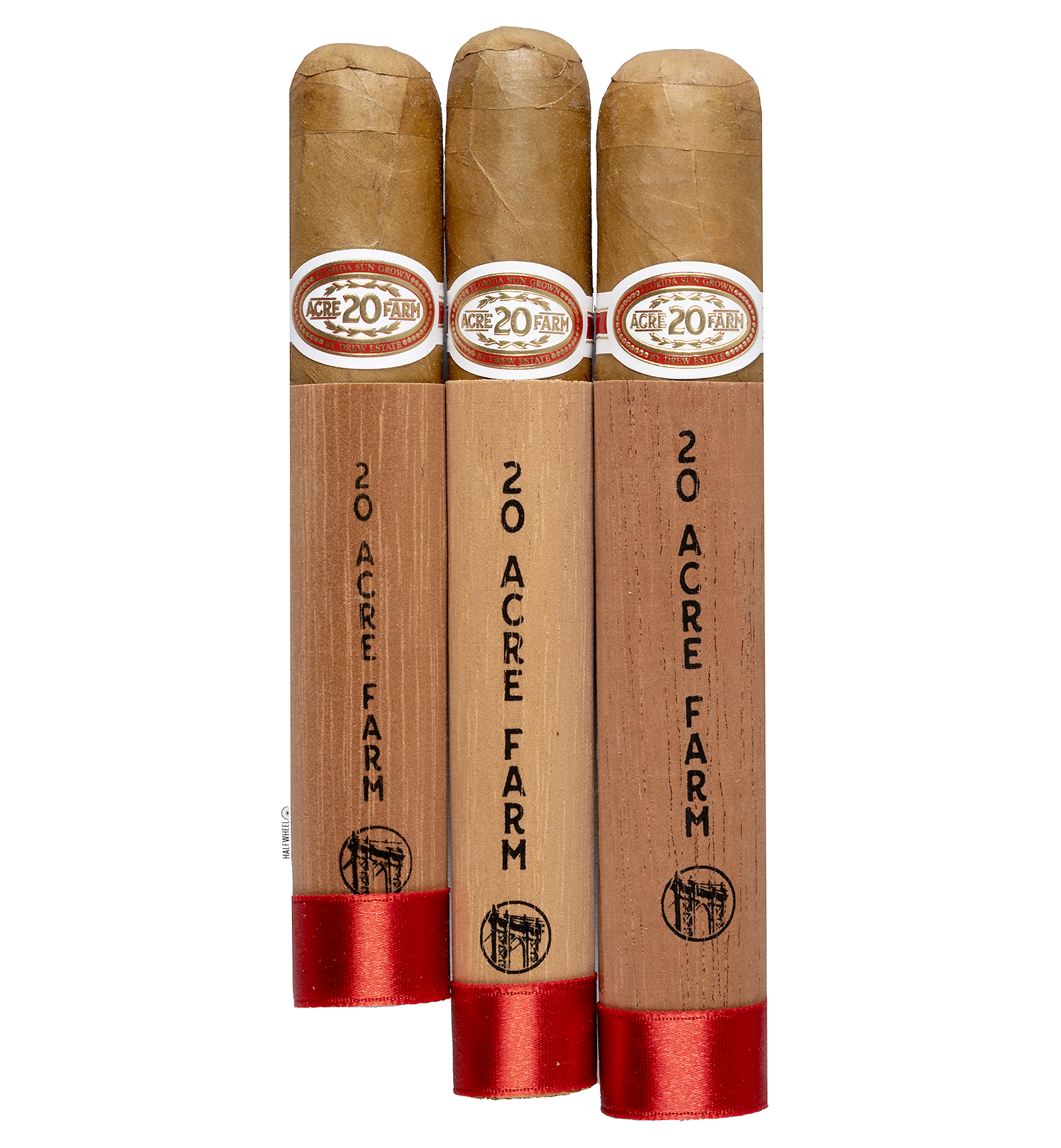 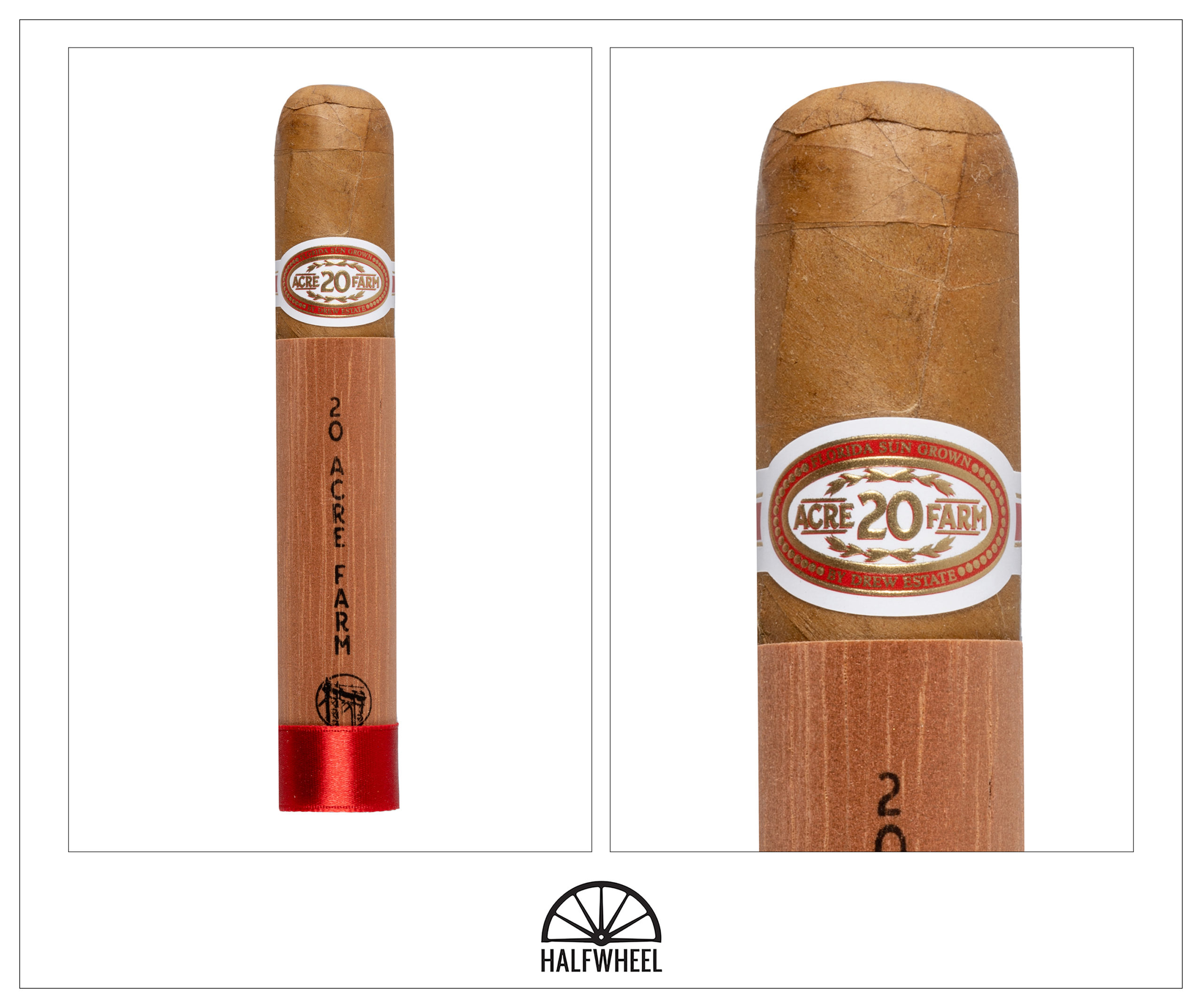 Due to the combination of a foot ribbon, a cedar wrap and a main band that takes up about 80 percent of the total real estate of the cigar’s wrapper, the actual wrapper is difficult to see with any clarity at first glance. However, removing the cedar wrap reveals a golden brown cover leaf that is somewhat smooth to the touch, albeit with almost no oil that I can see. All three samples have at least one large overt vein and are extremely hard when squeezed, though the second cigar has a small soft spot about halfway down the cigar. The aroma from the wrapper includes not only very aromatic cedar—mostly a result of the cedar wrap I just removed—but also creamy leather, cinnamon, hay, earth and barnyard while the foot brings aromas of strong orange peel, cloves, cinnamon, cedar, generic nuts and cocoa nibs. After a v-cut, I am tasting cinnamon and orange peel similar to what I picked up coming from the foot, along with anise, espresso beans, cashews and leather with some slight white pepper.

There is quite a bit of creaminess in the profile of the 20 Acre Farm Robusto from the first puffs, with cashews and white pepper leading the way in the profile after I light up the foot. While that cashew remains one of the top flavors during the first third, a distinct toasted bread note joins in as well, with additional flavors of lemon citrus, cloves, cinnamon, cedar and slight coffee beans following behind in various amounts. Although one sample needs a minor correction with my lighter early on—almost immediately after I get the foot lit—it is relatively minor, while both the draw and smoke production are excellent so far on all three cigars. In addition, the retrohale is quite enjoyable and includes noticeable amounts of both bready graham cracker sweetness as well as white pepper, both of which seem to be increasing as the first third burns down. Flavor is medium but rising, while body and strength end the first third at a point firmly between mild and medium.

A creamy cashew flavor remains one of the main notes I am tasting during the second third of the cigar but a distinct cedar flavor has outpaced all of the others to take the second spot. In addition, the secondary flavors have changed quite a bit and now include powdery cocoa nibs, leather tack, toasted bread—the same note that was in the first third, just not nearly as much of it—nutmeg and hay. While there is still plenty of white pepper on the retrohale, the graham cracker sweetness is replaced by a somewhat stronger honey sweetness, although the balance is no worse off for the change. All three aspects of the construction—burn, draw and smoke production—seem to be working in harmony on two of the samples, while the third has some issues with a run-away burn line that is easily corrected. Flavor has bumped up to medium-full, but the body and strength continue to be in unison, with both reaching a solid medium. 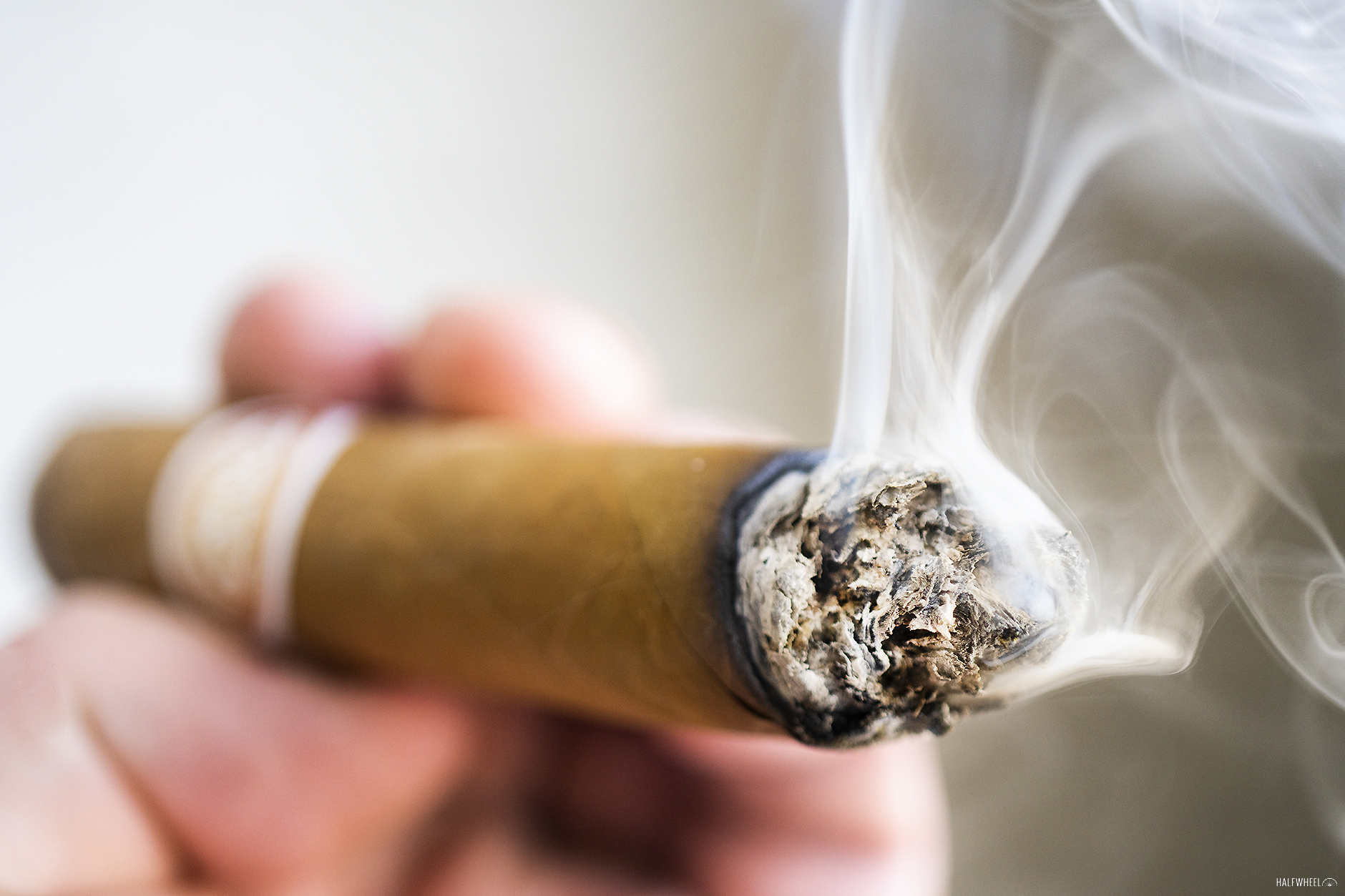 While the final third of the 20 Acre Farm is essentially a continuation of the previous third, I don’t find anything wrong with that. The profile is still extremely creamy on the palate, with cashews and cedar flavors easily outpacing notes of leather tack, dark and bitter chocolate, earth, cloves, nutmeg and a light citrus which makes themselves known at various points. Those aforementioned flavors are only accentuated by the combination of white pepper—which has waned slightly—and honey sweetness on the retrohale. Thankfully, any issues with the construction have abated, meaning that I smoke through the final third without once thinking about any aspect of the draw, burn or smoke production. Flavor ends at full, body ends slightly above medium while the strength seems to have stalled out firmly in the medium range. 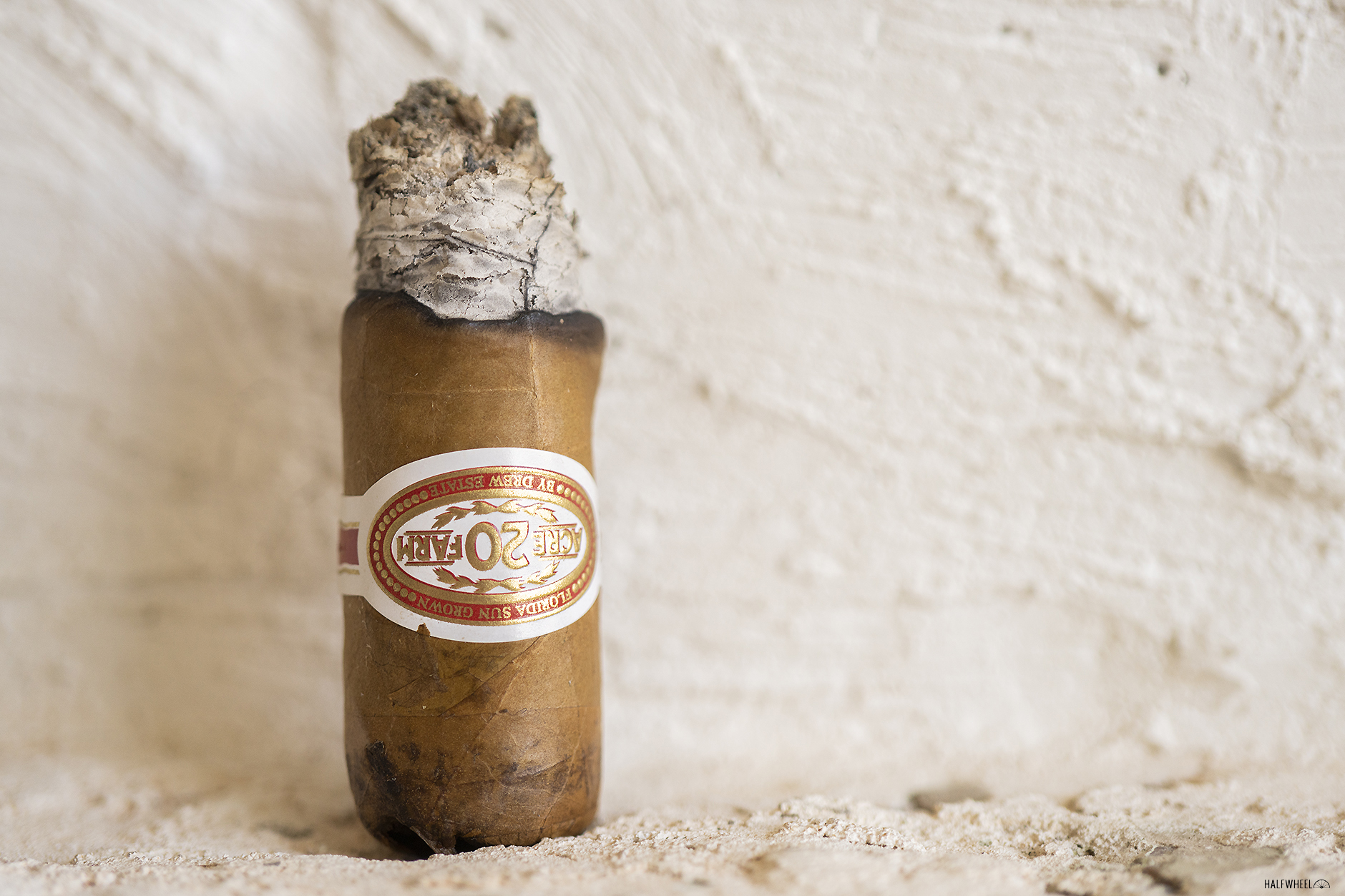 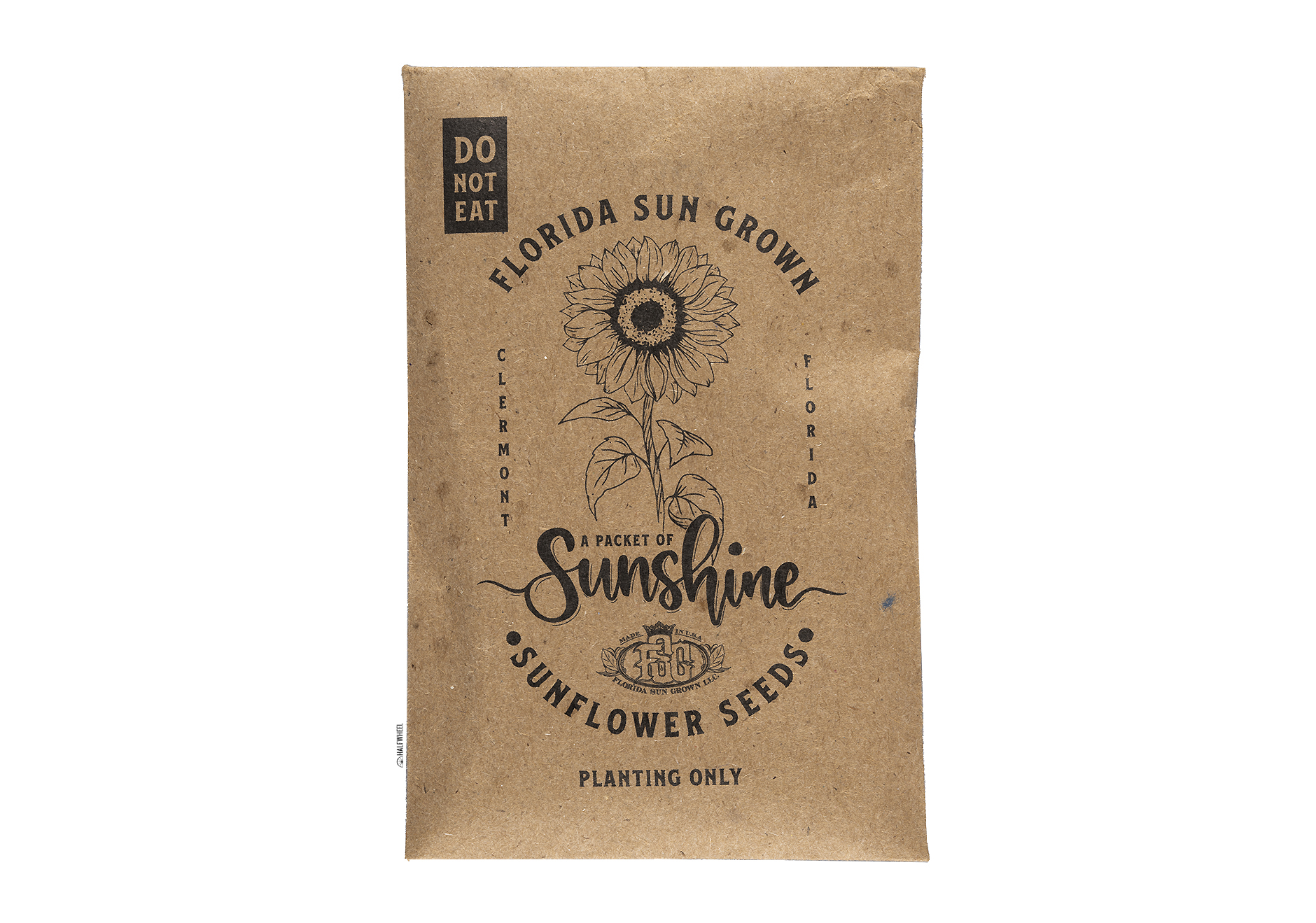 Because I was interested in the cigars that were sent out, I tried one of the prerelease versions of this cigar—that incidentally, were shipped sans cedar wrap—which I found to be fairly standard and uninspired when it comes to flavors. Thankfully, the actual banded versions were quite different: the profile is sweet and creamy, complex and balanced, with a wonderful combination of cashews, cedar and toasted bread on the palate along with both graham cracker and honey sweetness interspersed with white pepper on the retrohale. Throw in overall good construction and copious smoke production that never lets up, and I am left with one of the better Connecticut-wrapped blends I have smoked in quite a while.