The latest release from Global Premium Cigar’s 1502 brand, the annual limited edition cigar called XO, has been on the radar of the cigar world since the 2015 IPCPR Convention & Trade Show, though it took some eight months to actually arrive at retail.

Enrique Sánchez of 1502 isn’t disclosing most of the details about the XO, though it has been confirmed that Plasencia Cigars S.A. in Nicaragua is making the 6 x 50 cigar, which comes with a price of $17.75 per stick, before taxes.

It made its debut on March 5 at Wooden Indian Tobacco Shop in Havertown, Pa., with additional retailers receiving it shortly thereafter. As part of the buildup to the cigar’s release, the company held an XO Draft Day, where the 1,502 individually numbered boxes were divided up amongst existing accounts. The rollout of the cigars is scheduled to continue through late April or early May.

The cigars come in boxes of 10, although our samples were shipped in a smaller sampler box. 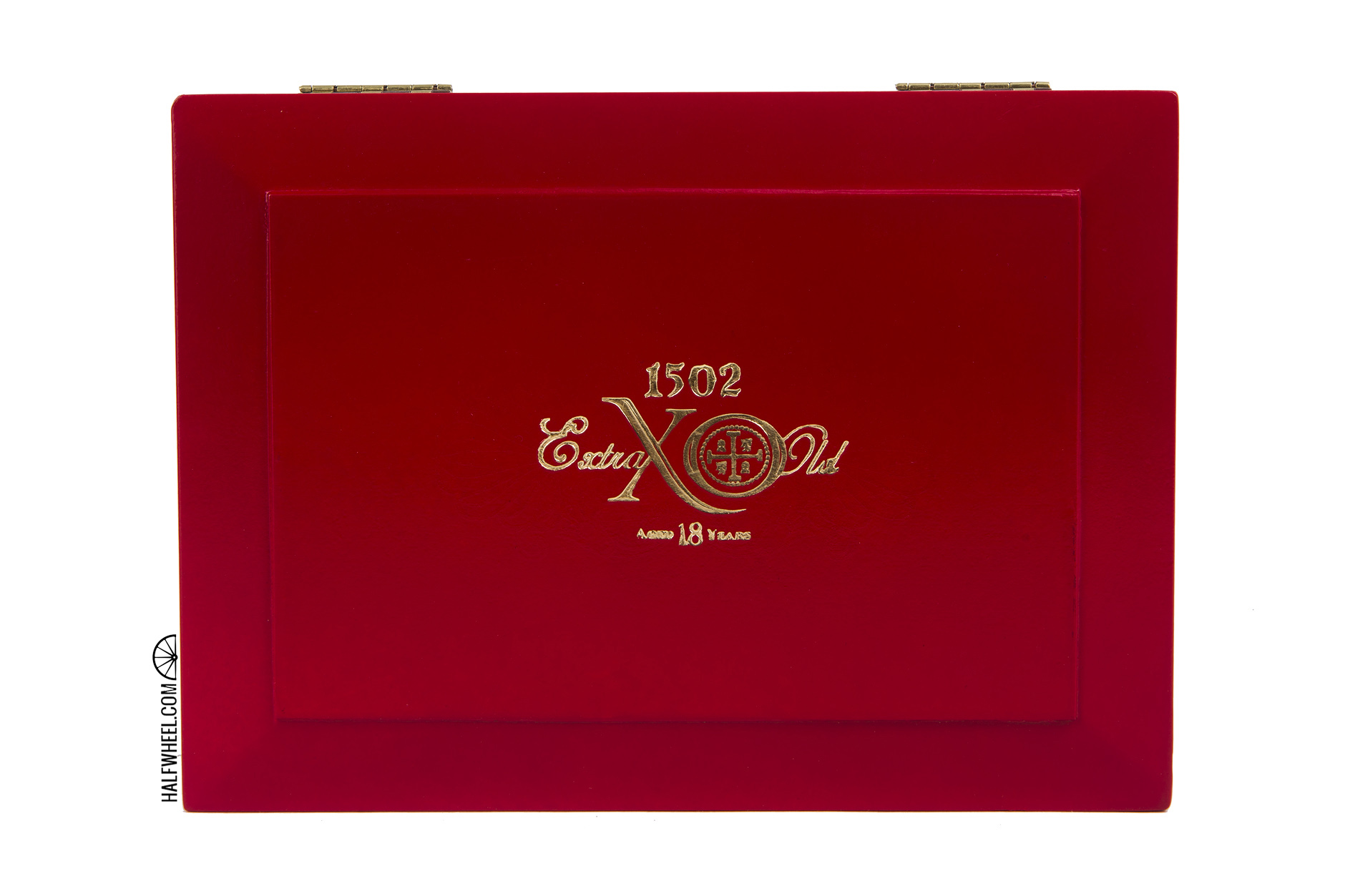 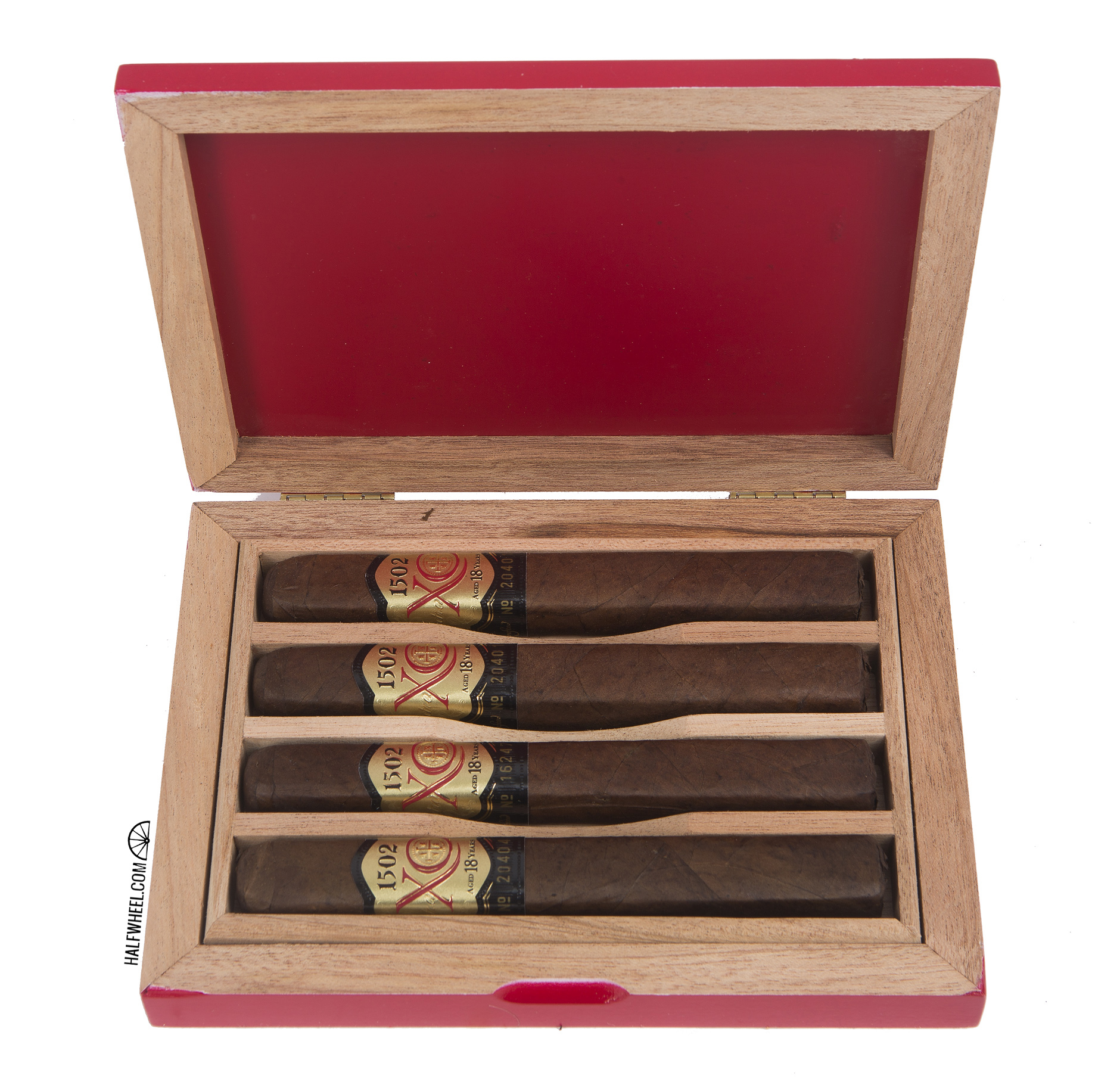 It’s the first cigar in what promises to be an ongoing series, released annually in a different vitola. Just like it does in the cognac world, the XO in the cigar’s name stands for extra old and refers to tobacco that is part of the blend that has been aged for 18 years. Because of its very sharp and firm box press, the 1502 XO immediately commands your attention, then earns it with a dark and somewhat veiny wrapper and a striking black and gold band with the XO mark boldly displayed in red. Despite the dramatic box press, the cigar isn’t quite as firm as you might imagine, showing a bit of pillowy softness from head to foot. At the foot of the cigar is 1502’s signature “locked foot” design, where the wrapper extends over the foot and partially covers the edges, about half of the total surface area. There is definitely a bit of paint smell that has infiltrated certain samples (more on that below), though it isn’t consistent from one cigar to the next. When it is there, it’s most notable on the foot as the wrapper doesn’t show it quite as vibrantly. It’s not overpowering, and I asked someone who isn’t a cigar smoker if she smelled it and while she did, it wasn’t the first thing that came to her mind. Beyond that, there’s a bit of raspberry and hay in the aroma, with little to no appreciable pepper. The cold draw ranges a bit in terms of air flow, from near perfect and slightly firm to fairly loose, all with a subtle but refined tobacco note guiding the offering, though one sample seemed to have a bit of the paint skewing the flavor.

I find myself struggling for words to describe the first few puffs of the 1502 XO, as in one sample it’s subtle and  muted, though there is some pepper and barnyard sweetness beginning to come through, while in another it’s a mix of sweet, tangy, peppery and sour that start things off. Things begin sorting themselves out fairly quickly, with a bit of coffee and chocolate fighting for my first bit of attention before pepper begins to kick in both on the palate and in the nose via retrohales. The burn rate on the first cigar is a bit of a struggle, as I have to relight it twice, though on the first sample of a cigar I tend to be a bit more lenient as I learn its quirks and needs to stay lit. The second and third samples need a relight as well, though burns more than satisfactorily for the most part. After I knock the first clump of ash off at just about an inch long, the cigar wakes up with a ton of black pepper that is potent but not particularly heavy. It’s also not very lingering, as the strength dissipates as the burn line moves on and begins to get a bit wavy. Flavors of a dry brownie stand out though the cigar is far from sweet, with pepper and a bit of bark and root beer adding complexity. I’m impressed by where the 1502 XO seems wanting to go, adding a bit of vanilla as the second third commences, the first of several flavors that come and go in the second third. Notes of toast, dry wood and a bit of chili flakes all step forward in this section, rarely at the same time but rather in a steady ambling of the flavor journey. One constant through all these subtle changes is a steady drying of the profile and the mouth, as my saliva production slows to a near crawl and I’m frequently reaching for a beverage to mitigate the physical reaction I’m having to the cigar. Strength in the first half is medium to medium plus at most, with no lack of flavor in any puff. It’s always a bit of a challenge to tell exactly how much of an effect the age of the tobacco has on a blend, but I will say that for the most part, the 1502 XO is a very smooth cigar, with hardly any harshness showing up. The burn has improved noticeably as well; even though it doesn’t seem like it at times, the cigar manages to stay lit during periods of rest and with a few puffs returns to putting forth copious amounts of smoke. The final third kicks off with a much more flavor- and strength-forward profile, the latter being the first time the cigar has flexed its muscle in this area. The flavors continue to evolve as any trace of sweetness or even foods that might suggest sweetness are long gone, replaced by more dryness and a flavor that has me thinking of mint toothpaste; a bit gritty but with a fairly pleasing top note. The aroma from the cigar gets a good bit smokier, much like the smell of sitting too close to a campfire or fireplace, though there are points when it is absolutely fantastic and picks up a rich, meaty quality that is almost straight smokehouse. The burn line runs into the occasional challenge in the final inches, once needing a touch up while on another sample correcting itself without assistance from a lighter. There is plenty of biting pepper that goes after the tongue and palate with near reckless abandon, a boon for those who like that kind of flavor but one that can be a bit overwhelming as the cigar wraps itself up. 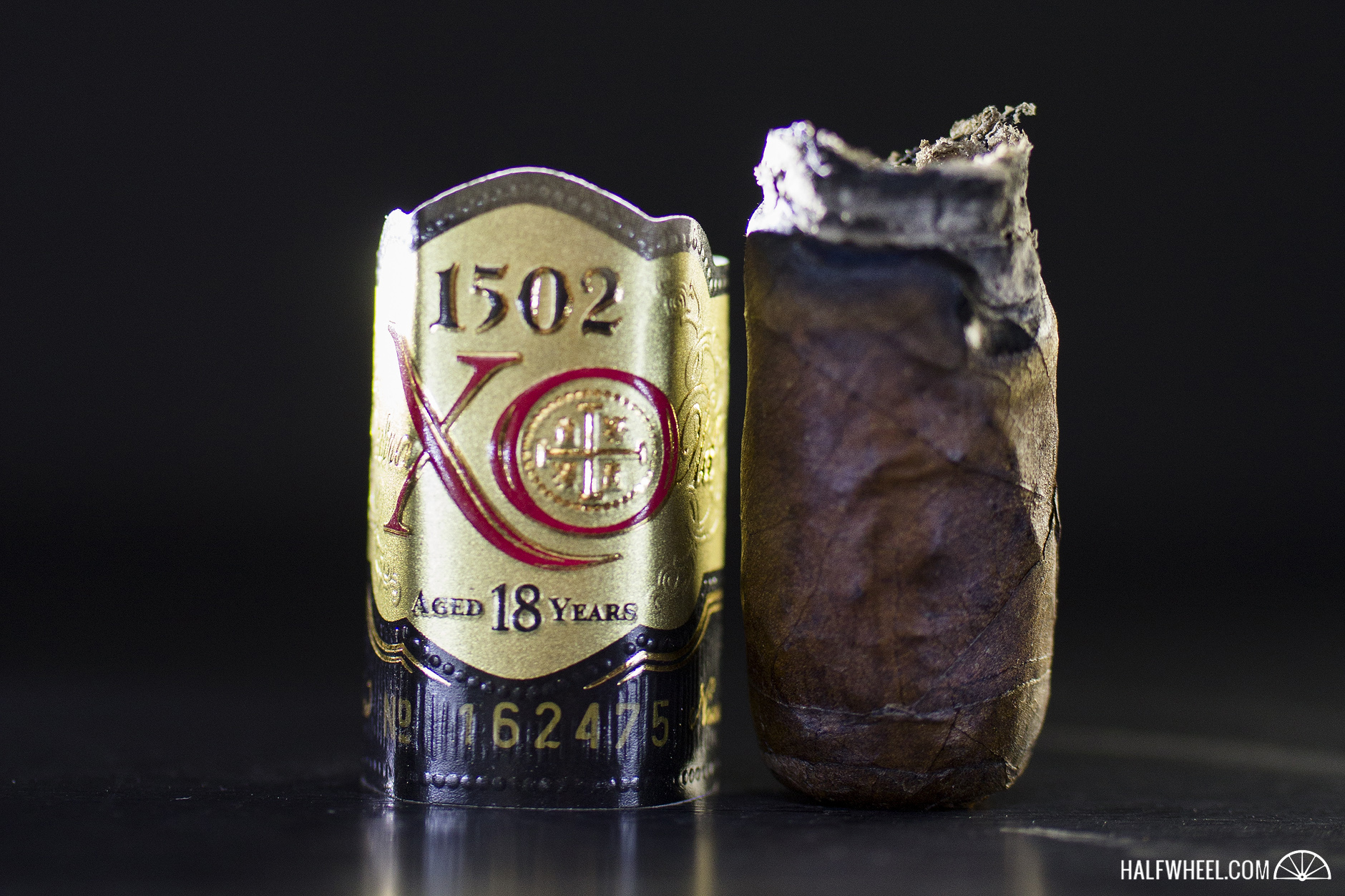 As soon as I opened the brown paper envelope the cigars were shipped in, a paint aroma started pouring out. This was somewhat remarkable considering the box itself was wrapped in plastic.

Once the plastic was removed, the paint smell got stronger, which is expected I suppose. We removed the cigars from cellophane, put the cigars in their own bag with a Boveda and threw out the box, which was unfortunate because the box looked nice, but it smelled too much for me to even entertain airing it out.

As shown above, our cigars were part of a sampler box, not a retail box, so perhaps this issue doesn’t persist at retail.

For those wondering about whether we review the cigars, our policy is to review the cigars as they came, unless they were clearly damaged in shipping or by a retailer’s storage. While it’s certainly likely that the cigars that went to retail, given they didn’t ship in the exact same boxes, avoided this issue, it could have happened. In the end, if a manufacturer is willing to ship us cigars, in a box that wreaks of paint, we’ll review them.

I was certainly intrigued to try the 1502 Cigars XO when it was first announced last summer, though when the cigar finally arrived and I started hearing that there were issues with a potent paint smell, I was a bit less enthusiastic. Then when a cigar shows up with a beetle hole, I was downright hesitant to light the cigar up. While the opening flavors are a bit messy, they straighten out quickly and begin a journey that is well balanced and flavorful without being overly strong or powerful. The points where the cigar the shows sweetness without being overly sweet are some of the best it offers, while the clean and potent pepper still deliver the punch that many palates will want. I'd love to get the burn issues out of the cigar as it did cost it a point or two, while the paint issue is one I'm not quite sure how to resolve, other than to give the cigars the opportunity to air out as it seems that did a good job in mitigating the issue. At nearly $18 a cigar and with a limited production it's hard to say this is a regular rotation cigar, but like all of 1502 Cigars' offerings, it is certainly worth a try.