While still a relative newcomer to the cigar landscape, 2013 was a big year for 1502 and its parent company, Global Premium Blends. After announcing a distribution agreement with House of Emilio in September 2012, the company had a much more visible presence at the 2013 IPCPR Convention and Trade Show and began to bring their three lines, the Emerald, Ruby and Black Gold, to more than 100 retailers, a significant number for any manufacturer to hit as they look to gain a foothold.

Praise has also been fairly plentiful for the 1502 portfolio, as two of those lines, the Emerald and Ruby, earned spots in the 2013 Consensus, with the Emerald coming in at #16 and the Ruby at #24, a sign that the line has started to gain awareness and acclaim.

The Emerald line is described as fina fuerte, which translates as fine strong. Enrique Sánchez, ceo of Global Premium Blends, says that the Emerald tends to be his breakfast cigar due to its relative mildness, with the Ruby the midpoint in strength and the Black Gold as the company’s strongest offering.

Since it debuted, the 1502 Emerald blend has only been available in two sizes, a 6 x 50 box-pressed toro and a 6 1/2 x 52 box-pressed torpedo. However, that will soon be changing, as Sánchez announced in November 2013 that he will be adding both a lancero and corona to all three of 1502’s lines, with the Emerald Lancero scheduled to appear by the end of February. While the cigar will be a regular production, its debut will be limited to just 200 boxes of 25, for an initial run of 5,000 cigars.

Sánchez is also looking to grow 1502 in 2014 with the addition of the brand’s first Nicaraguan puro, the 1502 Nicaragua. The company proclaims itself as “proudly Nicaraguan” and Sanchez thought it was time for a cigar that used exclusively Nicaraguan tobacco. The 1502 Emerald Lancero is covered in a light to medium brown wrapper that is fairly uniform in color save for a few spots near the bigger veins. Both the seams and veins vary from cigar to cigar, showing more prominently on one than on another. There is just the slightest bit of wrapper overhanging the foot of the cigar — by no means it is a closed foot, but rather it has a lip, and if you didn’t know better, could make the case that it was a last minute fix of a poor cutting job. It is in fact a very intentional part of every 1502 cigar, something Sánchez calls the cigar lock, a lip to lock in flavor and prevent splitting. While there is a bit of give, the cigar quickly shows a firm core when squeezed and has no visible irregularities. The pre-light aroma is mild and shows a light citrus note reminiscent of a Clementine, as well as some sweet wood and vanilla. The cold draw is fairly easy and offers flavors that are much more present, with notes of dry pretzel and a touch of wood.

The first impressions of the 1502 Emerald Lancero come across a bit bitey with an upfront wood note leading the way that backs a dryness that engages the entire tongue. There is a bit of white pepper on the tongue and a smidge more on an early retrohale, but the cigar certainly isn’t a pepper bomb in the early going. The dark gray ash doesn’t show much staying power and drops off unceremoniously well under the one-inch mark. There are some subtle flavor shifts throughout the first third, including a touch of brown sugar that comes along, and the pepper picks up quickly in the nose with each attempt at a retrohale. The smoke is surprisingly abundant for a lancero, never leaving me wanting for more or struggling to get more produced. The second third is where the sweetness starts to dissipate and the 1502 Emerald Lancero slows its flavor progression in favor of settling into a mild-plus level cigar with muted notes wood and coffee, the latter of which is so genuine at times that you would swear you have a freshly poured cup sitting next to you. There is little if any pepper to be found before reaching the midway point, and the flavors are so familiar and subtle that it’s hard not to overlook them. Heading into the second half, the strength picks up ever so slightly as the flavors begin to intensify just a bit, with just a touch of pepper being added. There is some newfound creaminess in the smoke that signals the transition to its final third. The sweetness found earlier has largely faded away as the 1502 Emerald Lancero heads into its final third, leaving behind a mild smoke with just a touch of pepper and creaminess, and if anything it is the texture of the smoke that has undergone the most dramatic transformation over the past inch or two. The cigar also feels a bit softer than it did prior to its lighting, coming across as a bit more spongey than it did prior to being lit. The burn slows a bit in the final two inches and doesn’t seem to want to be burned down to the fingers without more work than I’m willing to put in, so out into the ashtray it goes. 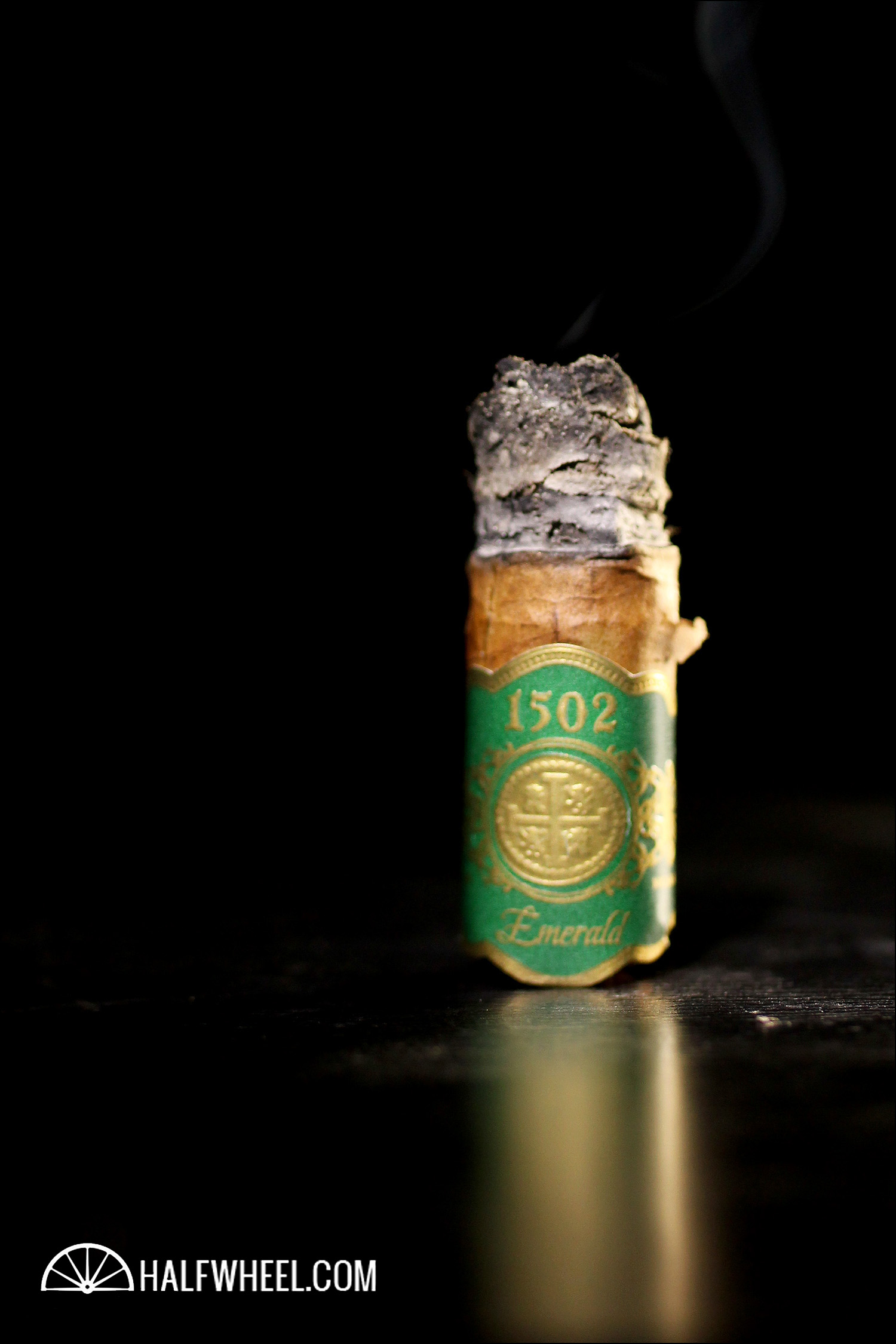 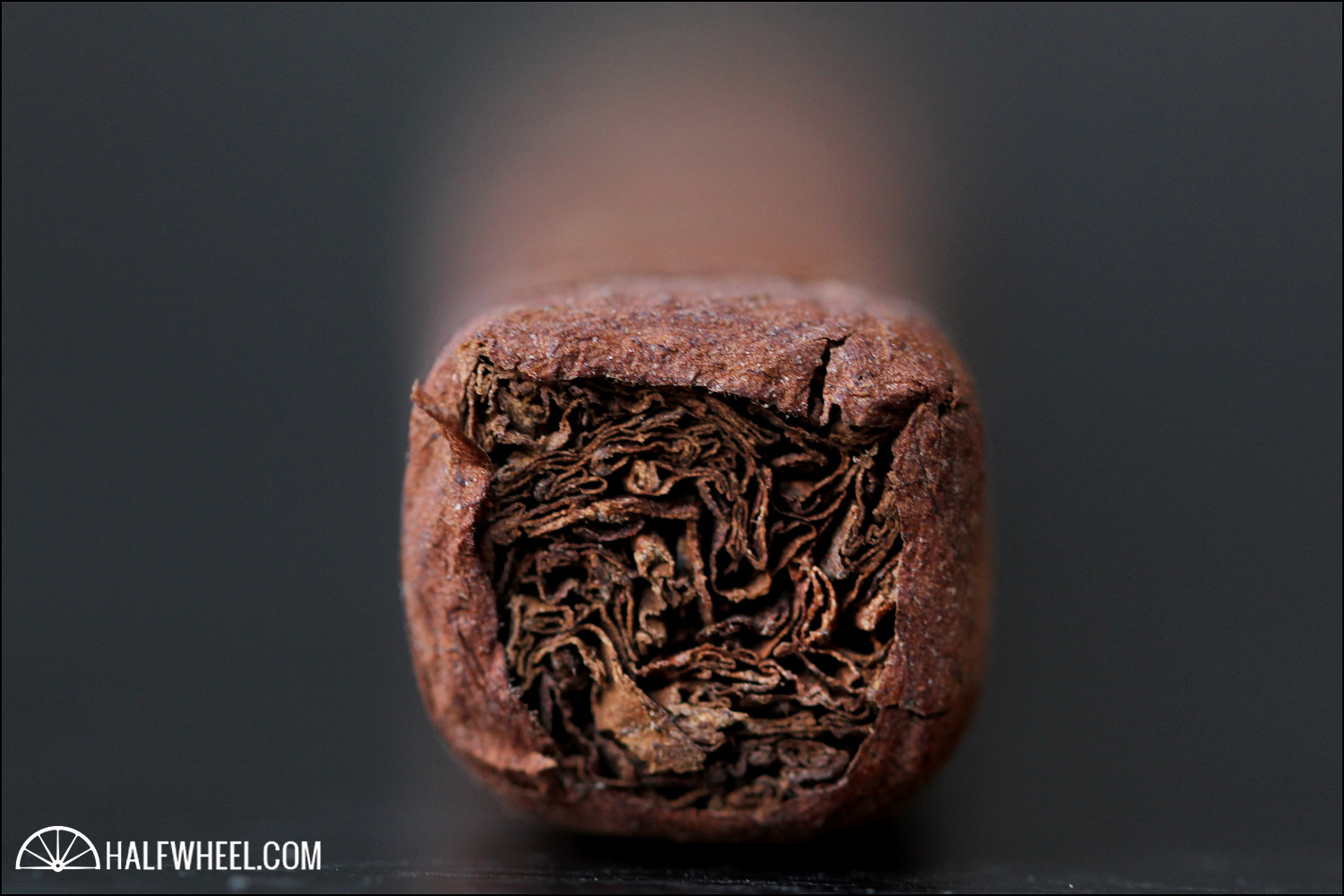 I can certainly see why Enrique Sánchez prefers the 1502 Emerald blend as his morning cigar, as its flavors are mild enough to be an easy start to the day but pack enough oomph to wake you up, get you going and keep your senses of taste and smell from getting bored. It can also hold its own in terms of body for a smoke later in the day thanks to a surprising amount of body, though the flavors are certainly a bit muted and won't have you thinking this is a typical Nicaraguan cigar nor scratching your itch for a cigar with bolder flavors or significant amounts of pepper. That said, the 1502 Emerald Lancero has proved itself worthy of a try thanks to keeping its flavors in balance and above average technical performance, a solid starting point in the journey through the brand's offerings.